One by one, borders are being closed to the masses of innocent people scrambling for safety and shelter. In response to the recent terror attacks in Paris, multiple states including Michigan, Texas, and Arkansas have added their names to the list of off-limits territory for refugees fleeing their dangerous, hostile homelands. Why? Perhaps people are scared, afraid that by letting sheep into the fold wolves will sneak by in wool. Perhaps people fear that a great many refugees are terrorists incognito, following orders from their ISIS commanders. Perhaps they are trying to look out for their own, seeing it as their primary responsibility–for one reason or another–to protect their own from even the potential of threat, even if it means guaranteeing the demise of others. Whatever the reason, we are turning away thousands of innocent men, women, and children, scared people who are doing everything they can to protect their families.

This is all fine from a secular standpoint. It is, of course, the government’s job to protect our rights to life, liberty, and the pursuit of our own happiness. But for the Christian, the Bible offers a different ethic by which we engage with the recent refugee crisis, one marked by love and the nature of the cross of Jesus.

We see in Scripture the story of a people founded on sojourning and wandering. The Bible is full of refugees whom God chose to work through. To list a few from the Old Testament,

This list reveals that God’s people have known the plight of refugees from very early on, from Abraham to the prophets. This is why God commands the Israelites to accept the foreigner: “The stranger who resides with you shall be to you as the native among you, and you shall love him as yourself, for you were aliens in the land of Egypt; I am the LORD your God” (Lev. 19:34). Because of their past, Israel was commanded to empathize with the sufferings of foreign sojourners. While this doesn’t provide a regulation for the church (considering the differences in ethic between national Israel and the institution of the church), it does provide the moral pattern for empathizing with refugees based on our historical roots as a people. 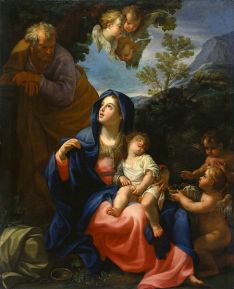 This leads us to the New Testament narrative, which begins with the refugees Mary and Joseph, mother and earthly father of Jesus the Christ. After giving birth to the Son of God, Mary fled with her husband and her child to Egypt, seeking refuge from Herod the Great, who sought the child’s life (Matt. 2:13-14). Even the Son of God spent His first few years on earth as a refugee! Truly, He was a man acquainted with sorrows from His youth.

In the books following the Gospels, we see that the church is made up of some Jewish refugees, among them Aquila and Priscilla, displaced from Rome to Corinth by the Emperor Claudius because of ethnic persecution. Not only was the church made up of a number of Jewish refugees, the church itself became a group of refugees in its early days when persecution forced them to flee from Jerusalem outward (Acts 8:1, 11:19).

So the New Testament church, as God’s people on earth, was birthed in multiple crises that contributed to a refugee situation. More than this, God’s son, Jesus Christ, was birthed into a refugee crisis. Since then, the church has been on the run from one threat or another, whether it be Roman persecution or Iranian extremists. Whether it’s the Puritans fleeing England or Christians fleeing Stalin’s Russia, we have been founded on migration narratives from Abraham to Jesus, from Priscilla to the Puritans. But our identity and empathy with refugees runs far deeper than our history; it is our identity.

As one song so aptly explains, “We have known the empty senses of a funeral; we are haunted by the promises of death….We are beggars at the foot of God’s door.” You see, we have been granted refuge in the throne room of His grace. We approach by a right accomplished not by us, but by One greater than us. We have fled out of darkness, out of sin, and out of pain, running from the oppressive tyranny of the god of this world. We have less of a claim to cross over the border from this world into His kingdom than the refugees have to enter the West. We fled from a crisis of our own making; we are the ones who broke the world. But our gracious God grants us refuge in His shalomic love. As the author of Hebrews tells us, “we who have fled for refuge might have strong encouragement to hold fast to the hope set before us” (Heb. 6:18b, emphasis added).

We are refugees in the throne room of God’s grace, granted asylum by the work of Jesus Christ on the Cross. Knowing the pain of displacement both historically and spiritually, and knowing the graces of the One in whom we seek refuge, we are faced with a decision. 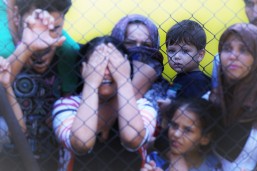 As Forbes author Elizabeth Allen points out in her recent article, we are faced with more than 11 million Syrian refugees seeking help, more than half of whom are children. We, who would be dwelling in hopeless darkness without our Benefactor, have a responsibility to help the ones in need. Freely we’ve received, now freely we must give (Matt. 10:8). We are promised that when we welcome the stranger, we welcome Jesus, but also that when we reject a stranger, we reject Jesus (Matt. 25:35). If rejecting one stranger means rejecting Jesus, what does it mean when we reject 11 million strangers?

It may be argued that the above verse about hospitality to strangers applies only to “fellow believers.” This point is well taken, but while the verse is presently concerned with treatment of “Christian strangers,” it is swept up in the larger picture of unconditional care for the hurting. We are told to love the wicked and the righteous, because God Himself sends rain on the just and the unjust (Matt. 5: 43-48). We are supposed to give to those who beg from us (Matt. 5: 42), and right now millions are begging at our doorsteps.

So we have an ethical mandate to accept the foreigner and the refugee in need. We should empathize with them, being refugees ourselves, and are encouraged by the ethical pattern of both the Old and New Testaments to lend aid to the refugee. But the church has even more reason to reach out to the masses flooding to the West.

Before the Lord left, He gave the church His final marching orders: the Great Commission. “Go, therefore, and make disciples of all the nations” (Matt. 28:19). Christ’s final command to us was that we should fulfill the Greatest Commandment by carrying out the Great Commission, carrying the gospel to all the nations, rescuing those in darkness by carrying them to refuge at the foot of the cross. We are invited, and commanded, to take the gospel to the nations, and now the LORD has brought the nations to us.

With only 6% of Syrian Arabs confessing Christianity–and only 0.1% evangelical–the vast majority of refugees will be Muslim. If what we profess is true, and we really do believe it, then we should feel a sense of urgency to give asylum to our hurting neighbors and love them with the love of Jesus. It is not just of political importance, it is of eternal importance. We, saved by grace, now extend that grace to others.

And some of them may kill us. Yes, it’s true, and Paris has taught us that there is a riskiness to love. This is a legitimate concern. But the lesson Paris taught us is not a new lesson; we encounter it most potently in the cross. Jesus the Christ, the Son of God, loved us–poor sinners and refugees and enemies–even to the point of death on the cross. It is the cross we are called to, and the cross has never been convenient, comfortable, or safe. Love has always been dangerous.

Perhaps this is why the cross is called foolishness to the world (1 Cor. 1:18), because it can get you killed. Still, we are called to faith, not to safety, and in losing our lives we trust that we will gain our lives in Him. We must spend ourselves for the sake of the gospel, because it is the power of God for the salvation of all who will believe (Rom. 1:16).

That being said, I do not believe that we should shirk all regard for safety. This is not a disregard for wisdom, but an understanding that the demands of God calls us to take risks in loving others. As above mentioned, the government should concern itself with the protection of its citizens, but the majority of these refugees are children, and many more are women. And we can tighten the screening processes. We can keep close watch on those we welcome into our country. We can evaluate and implement options that do not shut the borders to all those who would seek refuge here.

I know it’s a scary thought that loving our enemies might get us killed. We shouldn’t be surprised, because it got Jesus killed first. We must have courage, anchoring ourselves in Christ for the strength it will take to move mountains in His Name. We refugees must pick up our cross and love Syrians seeking asylum in our lands, and remember that we are blessed when we are persecuted for righteousness sake, for ours is the kingdom of God (Matt. 5:10).

A final word on the subject. We are supposed to love our neighbors (Matt. 12:31). But who is our neighbor? When Jesus was asked this question, he answered with a story.

In reply Jesus said: “A man was going down from Jerusalem to Jericho, when he was attacked by robbers. They stripped him of his clothes, beat him and went away, leaving him half dead…. But a Samaritan, as he traveled, came where the man was; and when he saw him, he took pity on him. He went to him and bandaged his wounds, pouring on oil and wine. Then he put the man on his own donkey, brought him to an inn and took care of him. The next day he took out two denarii and gave them to the innkeeper. ‘Look after him,’ he said, ‘and when I return, I will reimburse you for any extra expense you may have.’”

“[Who] do you think was a neighbor to the man who fell into the hands of robbers?”

The expert in the law replied, “The one who had mercy on him.”

Jesus avoided the question, “Who is my neighbor?”, knowing that the man was seeking a limit to who he must love. Instead, Jesus told a story in which there is a nameless man  who needs desperately for anyone to help him. This man has little identity except that he is more than likely a Jew, travelling from Jerusalem. Without question, without hesitation, a Samaritan–an enemy of the Jewish nation–burdens himself with the Jew’s wounds and troubles. He resolves himself to do whatever it takes to help the travelling man, even though–being that he was a Samaritan–the Jew might react violently.

In the end, Jesus turns the question back on his inquirer, teaching him that there are no limits to the neighborhood. Everyone is his neighbor. Instead of trying to find the limit of his love, he should extend it unconditionally to anyone who would need.

May we love as Jesus first loved us.

Show your support by subscribing, liking, and commenting below!